Hello, This is the story of my rear ending accident. I was travelling at about 80 kph (45-50 mph) on the highway in Kitchener, Ontario Canada. The traffic stopped suddenly and unfortunately I had taken my eyes off the road for a split second and could not stop before clipping the right rear corner of a 1993 Mercury Villager. No one was hurt but as you can see there was extensive damage to my 2001 Sunfire.

I swerved at the last second and clipped his right rear corner ripping his wheel completely from his axel and sending my right front corner into the cement barrier off on
the shoulder. Luckily the only occupant of the van was the male driver and no one was seriously hurt. I was sore from tensing my back and neck on impact but other than that I was back to work later the same week.

Total damge to my car was estimated at $13,000 - $14,000 dollars because of the fact that the airbages deployed and thus was deemed a total loss.

I was wearing my seatbelt and I believe it prevented major injury. My advice to all motorists: Stay alert!! You do not want to go through what I went through.

Submit your Own Air Bag Accident Pictures and Story


1. Please use either a jpg or gif format. Tell us your story please include a description, date of the accident and the accident location (City, State, or Country if outside US).
2. You agree to our terms and conditions. 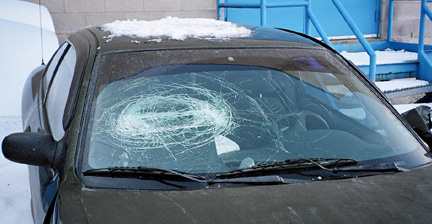