Saturn Bad Accident
SUV was weeving in and out of traffic going about 95+ mph. He lost control and came across the grass median.
Benton, Arkansas

December 30th, 1999 I was still out of school for the Holidays. I spent the day like any other Senior in high school at the time. I was making plans for the new year, for prom, and for the upcoming homecoming.

Around 6:30pm my mom decided we should run to the county line and get some drinks for friends to have on New Years, to fill up with gas, and to pick up some chinese food on the way home. We filled up with gas and got a few drinks, but never even made it to pick up chinese. We were headed towards Benton Arkansas down I-30. We had just got on the interstate and was only going about 65 mph. A heading the opposite way down the interstate in a SUV was weeving in and out of traffic going about 95+ mph. He lost control and came across the grass median. It had already started getting dark and b/c he was spinning and his head lights were facing the opposite way, my mother could not see him. Our Saturn and his SUV hit with atleast a 135mph impact.

According to my mom the paramedics arrived quickly. As soon as they took a look at the passenger seat and saw me they wrote me off. They figured there was no way I was going to make it. They removed my mother and the owner of the SUV from the rubble and put them in an ambulance. It only took about 15 min. for them to get them out. Then they turned to me to find me still alive. Med. Flight had already landed and was waiting on me, but I don't think they expected to wait over an hour. The paramedics tried 3 different jaws of life to remove me. Nothing could get my leg out from under the engine. After 45min. they decided to take my leg. So, the doctor on med flight prepared to amputate my leg right below the knee. One paramedic stopped him though and asked for one more try to get me out. Guess what?? It worked! They finally got me out and took me to Babtist Hospital in Little Rock. I was in ICU for a week, and then transfered to another hospital for another 3 weeks. After I was released I faced many months of physical therapy. I managed to still graduate as first in my class. It was a long hard road, but I'm glad I made it.

I had a compound break in my right femur, left arm was broken in 2 places, broken collar bone, lacerated spleen, fractured skull, minor brain damage, and multiple facial lacerations from where the windshield came back to me. I know if not for my SEATBELT I would have died. Sure my road to recovery was not short, but it was worth it.

My mother also fully recovered. She had a broken neck, broken fingers, all her ribs were broke, broken knee, and crushed heel. Her life was also saved by a seatbelt.

Here are a few pictures of our Saturn. 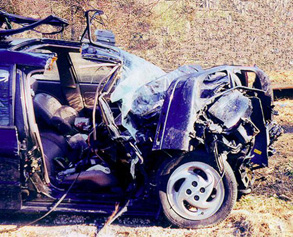 Submit your Own Auto Accident Picture and Story

1. Please use either a jpg or gif format. Tell us your story please include a description, date of the accident and the accident location (City, State, or Country if outside US).
2. You agree to our terms and conditions.
3. Send to 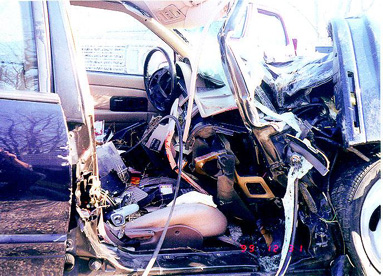